As you know we were devastated by the departure last October of our drummer Andrew Rae. Andrew was one of the founder members of the band with Martin and Andy and he will be missed for sure.

We have been through the audition process over the last few months and are very excited to announce Chris York from Middlesex will be joining us as our permanent live and studio drummer. We loved Chris’s playing in the audition, his sense of humour and the fact that like Andrew and Stefan (who was dep) he is a Liverpool FC supporter. Now that’s consistency for you!

Our task now with Chris, is to learn the live set and start the writing process for album 2.

I know you will join us when we say, we are absolutely delighted to welcome Chris to the band. 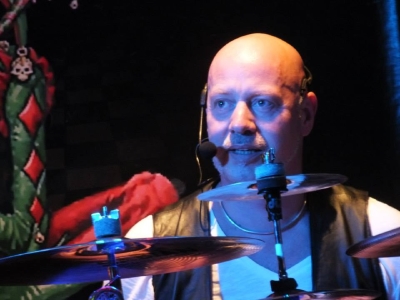 Since we last scribbled random thoughts and sent them to you, we have played two shows with our very good friends Also Eden. The shows in Winchester and Gloucester were terrific and there are some great pictures from both shows on the website and on facebook.

We have now exceeded 1,000 followers on Twitter and heading in that direction on Facebook. Please don’t be shy to recommend us to your friends!!

We have some very very exciting news to tell you about a special collaboration with our friends at The Classic Rock Society. It involves the release of a track…. That’s all we can say at the moment….but watch out for more news on that this month!

As you may have seen, we have already announced our appearance at The Cambridge Rock Festival in August. We will all be kept in sterile conditions on the run up to that after last years disappointment! We are making a return to the wonderful Home Farm Festival in June and we are hoping for the same weather as last year. We are on the main stage at about 7pm as long as we keep Martin off the scrumpy! Then we play a benefit for a great charity, Ian’s Chain in September, Danfest in Leicester is in November and there is one more festival to announce….watch this space!!

We have not played in London for a while and that is about to change. A new exciting show will be announced this week.
Once again Thank You, for all your support, your kind words and encouragement. We look forward to seeing you somewhere on the road this year.
Martin, Checkers, Steve, Chris and Andy