Weapon (Uk): “Rising From THe Ashes” – Album of The Month on Templo do Rock Radio

“Rising From The Ashes”, the first new Weapon (Uk) in almost 34 years is absolutely a masterpiece of Hard N ‘Heavy. Certainly one of the best albums of the genre this year! Applause for the band, is without much surprise, the album of the month on Templo do Rock Radio. Congratulations to Danny Hynes (vocals), Jeff Summers (guitars), PJ Philips (bass) and Ian Sweeting (drums).

Weapon, one of the greatest NWOBHM bands of all time formed in March 1980.

They released one single in 1980, Its A Mad Mad World/Set The Stage Alight’ it sold out within weeks promting a second pressing and a 12″ version.

A major tour with Motorhead pushed them to the forefront of the NWOBHM scene,so they recorded an album for Virgin which was shelved until 2003, when many of the songs were issued by the ZoomClub label for a compilation cd.
Lets not forget the Legend that tells of a soundboard live recording from that Motorhead “Ace Up Your Sleeve” tour that was labeled ‘No Sleep Till Hammersmith’ by the sound engineer, and now you know where the name came from.
For a new generation of heavy metal fans it is to arch NWOBHM plaguerists Metallica that their name remained known as they “borrowed” much of the single’s B Side for their song ‘Hit The Lights’, yet the band never quite made it to the next level. After a line up change and more gigs the band felt it was time to move on.
Success was found with Wildfire, Statetrooper and Paddy Goes To Holyhead for some members whilst drummer Bruce found a degree of major fame as part of NWOBHM supergroups with Paul DiAnno and other ex members of bands like Praying mantis, before joining with the reformed glam legends The Sweet.
In 2005 the band reformed to play a one off Anniversary show, such was the response that the idea to reform permanently become a real option, settling on a new line up they recorded a new track ‘Ready 4 U’in 2011 and returned to the live scene.
In 2012 the band added the ‘UK’ to their name and registered the band as a trademark for legal reasons (but it still just WEAPON to me).
Last year the band announced that they were recording a full album and that the original line up would also record a new song.
Well its here, so with a large vodka in hand its time to hit play and set the cd player alight! 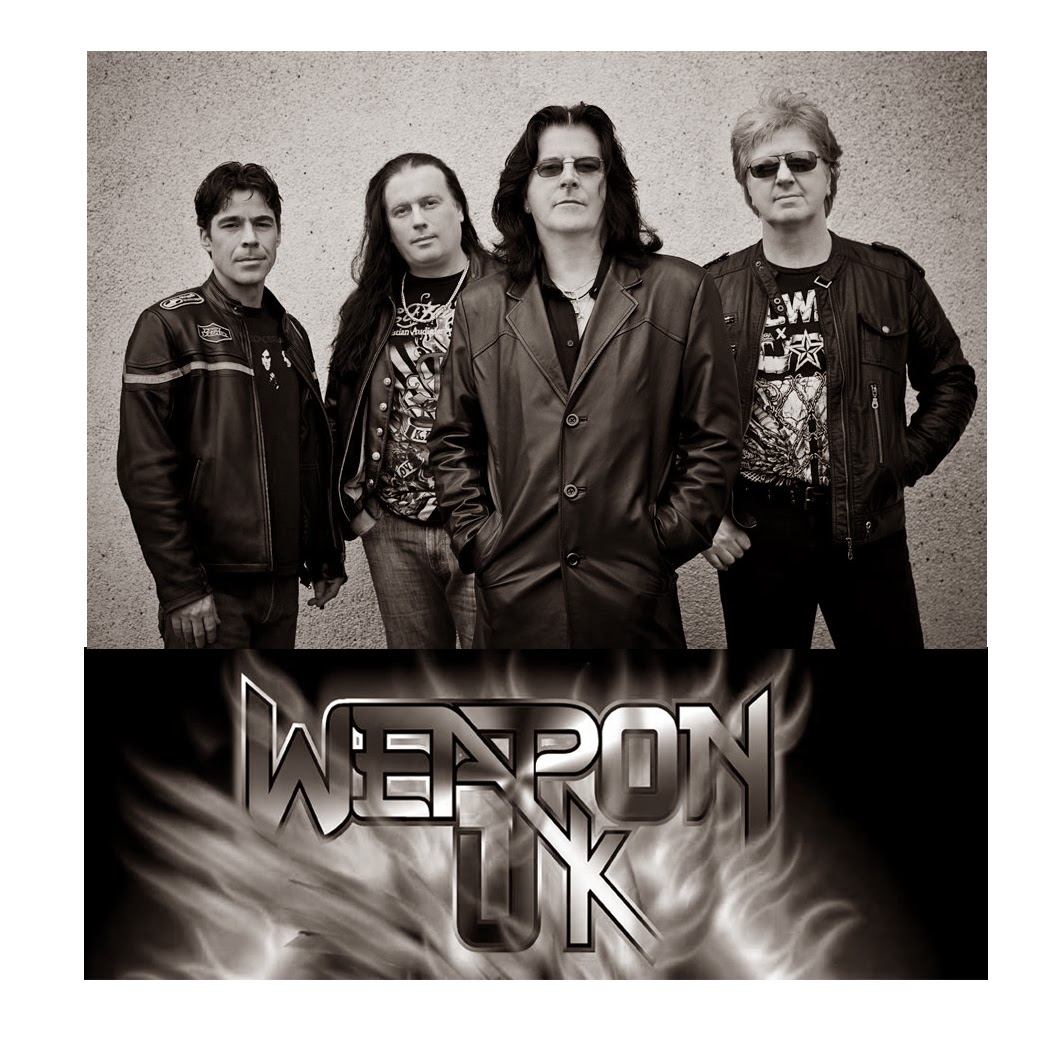 We start with a synth based intro with ‘Prelude – The Awakening’ which carrys on into
‘Ride The Mariah!’ which is not a song about sexual fantasies with Miss Carey, but a raw and heavy rocker with a solid drum beat driving the sound.

This one ‘Fountain Of Paradise’ reminds me of classic Motley Crue (Dr Feelgod era), its got that sleazy LA guitar rock sound, definately one for the american audience, semi-anthemic with a rich production.

‘Warrior’ has some nice basswork in the mix, one of those stop start type of songs, great backing vocals match the perfect lead vocal delivery, add to this a stunning riff heavy solo and you have a truly outstanding song.

This is an updated version of the download song released back in 2011, ‘Ready 4 U’ still has that “classic rock” feel, the backing vocal helps create a very melodic rock song, one might say ‘Commercial’ or perhaps ‘Radio Friendly’ rock in the vein of say Bon Jovi or old school Brian Adams.If this was re released as a single i would think it would gain major airplay.

An ambient/sound fx/sample greets the beginning of ‘Burning Skies’ and actually reminds me of Ministry’s NWO Redux (but slower), this is a dark song talking of the “hand of satan”, the riff reminds me of Ozzy Osbourne’s ‘Over The Mountain’ whilst the vocal style Danny has is reminiscent of Devin Townsend.
The use of samples is very well done and works well with the solid riff and driving drumming.

Look i’m sorry but ‘Alamein’ reminds me of the Scorpions ‘Wind Of Change’ and i hate that bloody song, so okay lets be objective, this is one of those acoustic rock ballad things with awesome production values, lead guitar work over acoustic guitar, harmonic vocal, nice backing vocals and it has that ‘emotion’ put into the vocal, but argghh no sorry not for me.

Now ‘Wonderland’ has that kick-ass sound, but do i detect a hint of post black album metallica in here? could be something of load/reload, though to be fair the harmony is more melodic, definately an american sound lurking here, you know like Dim Leppard perfected ! (yes i did spell that right!).

Kind of back in that early Bon Jovi anthemic, shout it out loud sound with ‘Blood Soaked Rock’, soon to be blasting out of car radios on the highways of america.

‘Bad Reputation’ is not a cover of Joan Jetts classic nor Thin Lizzys late 70’s song, this is another sleazy sounding rocker, again the backing vocals give the song a sing a long feel.
Dark and dirty riffs mix with some great basswork and that solid drumbeat keeps the whole thing moving.

The final track is ‘Celebration Time’ and it’s another well produced, radio friendly rocker, solid harmonies and some guitarwork reminiscent of Graham Oliver on Saxon’s classic ‘747’.

So 34 years since the original line up were last in the studio together and the new song is ‘Killer Instinct’.
Added as a bonus track i wondered if it would be old school NWOBHM but actually it reminds me of The Sweet in their heavier moments, perhaps not surprising with Bruce on drums, mind you it could have been weirder if it had sounded like Inner City Unit (Baz’s pre Weapon band with Nik from Hawkiwnd).

Okay so what this is not is a NWOBHM sounding album by a band trying to re-create the old days, this is a solid, mature album by a band who have grown up and taken in rock music and all it’s influences, what they have created is a brilliant ‘Classic Rock’ album.

On The Mayfair Mall Zine: http://www.themayfairmallzine.com/

‘Rising from the Ashes’ is the apty title new album for British Hard Rockers Weapon UK, some 34 years in the making, this seems as apt a title as any.  Danny Hynes, PJ Phillips, Jeff Summers and Ian Sweeting bring back Weapon UK with an all out Hard Rock arsenal of 10 riff filled songs that fill the gap left by the NWOBHM, this is the New Age Of British Heavy Metal.

Things get underway proper after the intro ’Predlude – The Awakening’ with ’Ride the Mariah’, a real dose of heavy bass and drums set out the bands mission from the off.  This is no tribute album to a by-gone era, this is a modern hard rock track from the seasoned veteran rockers.  Hynes vocals are perfect foil for this style of Hard Rock and Summers shows he hasn’t lost any of his guitar savvy as he throws out the licks on this one, as he continues to do so on the up tempo rocker ’Fountain Of Paradise’ and the UFOesque bluesy rock of ’Warrior’.

The tempo is picked back up big style with the harder edged melody rich ’Ready 4 U’, which is definitely one of my favourites tracks off the album, again Summers guitar work is excellent, alongside Hynes who really pushes himself on this one.

The show a heavier side with the stonking thunderous rhythms of ‘Burning Skies’ as Sweating and PJ Phillips bring the heat on drums and bass respectively, before the tempo is brought down with the haunting tones of ’Alamein’.  Then it’s straight on the gas once more with the funk filled ’Wonderland’.

The drums of Sweating open up another slice of pure hard rock in the excellent anthemic ‘Blood Soaked Rock’ and the riff fuelled ‘Bad Reputation’, before the album closes as it opened, on a high, with the party rocker ‘Celebration Time’.

The album does feature a bonus track in ‘Killer Instinct’, which features Weapon’s original members Baz Downes on bass and vocals and Bruce Bisland on drums and vocals.  This is a fitting end to an album that marks the return of Weapon UK.  It may have been 34 years in the making, but it was well worth the wait.  If you like your rock old school with a bite then check out ‘Rising From The Ashes’, because these four guys shoot from the hip.

Templo do Rock Radio - Album of the Month (November): METAL CHURCH "Generation Nothing"

Album of the Month: SOLDIER - "Dogs Of War"